Sure thing! In an initial ECU-TEST demonstration we will show you the most important features. After that you can start testing with your own evaluation license.

Request your trial via e-mail at sales@tracetronic.de.

Looking for a custom solution?

You are already working with ECU-TEST and now you are looking for a solution for your custom application? We are happy to make this as easy as possible for you. We can show you the range of projects that our tools are used in with different product demos, based on real application examples. We are continuously expanding this portfolio.

Simply send us an e-mail to let us know which product demo or application you are interested in and schedule your free demo with our engineers.

Let our test experts take you through the demonstration and approach them with your specific objectives. We are confident, we can find the right solution for your specific requirements.

You want to get a better insight into TraceTronic's Automotive DevOps platform? Then you have come to the right place! In this demo, we'll show you how our Automotive DevOps Platform can be up and running in just a few simple steps, and how test workflows can be seamlessly integrated from start to finish. We will illustrate this step by step using the example of an ADAS function.

In the overall DevOps process of vehicle development, the test automation section follows its own DevOps cycle. This can be mapped completely using our Automotive DevOps Platform and the integrated tools ECU-TEST, TRACE-CHECK, TEST-GUIDE and SCENARIO-ARCHITECT.

The starting point for the product demo is the testing of an adaptive cruise control function. Using this example, we will show you how precisely our tools cover the entire test process and how optimally all the necessary steps are coordinated with one other. From test planning to test evaluation – the Automotive DevOps Platform provides you with an end-to-end workflow across all stages.

Learn how driving scenarios can be developed in SCENARIO-ARCHITECT and integrated into test cases. How to start fully automated test execution with just one click in TEST-GUIDE using ECU-TEST and how to progress from simple static plots to complex signal analysis with TRACE-CHECK. Defects identified in the analysis process can be captured in detail using the integrated review process in TEST-GUIDE, then documented and passed on to your defect management system. All results are stored in TEST-GUIDE. There, the test criteria are subject to a final review and analysis, and are compared with the requirements for the test executions. Once everything is complete, the test results are exported – to meaningful PDF files, Excel completion reports or to another test management system. 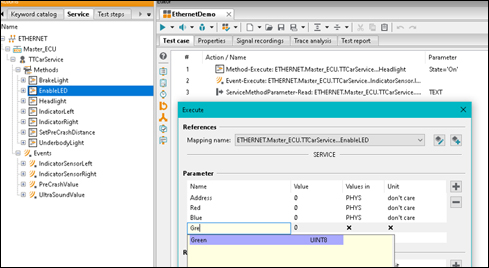 Are you planning to test High Performance Computing platforms (HPCs) developed on Adaptive AUTOSAR? The demo "ECU-TEST Adaptive AUTOSAR" shows possible scenarios with which you can experience how ECU-TEST simplifies and accelerates your test processes by means of the seamless integration of different access interfaces and the support of many standardized protocols and data formats.

The focus in this product demo will be placed particularly on the test description capabilities for service-based communication. In addition, the use of the Ethernet network protocols SOME/IP, DLT, SSH is clearly demonstrated. The AUTOSAR Adaptive Platform is a key technology for the most important trends in the automotive E/E sector. It is increasingly being used in highly automated driving and vehicle networking (V2X) in particular. Adaptive ECUs allow applications to be extended and software functions to be updated throughout the vehicle's whole lifecycle. Within the vehicle, Ethernet will both permanently change the networking structure and multiply the data throughput. ECUs running an Adaptive platform are interconnected via an Ethernet network. The increasing automation and communication of vehicles is leading to ever greater volumes of data. Therefore, the AUTOSAR adaptive platform with high-performance central computers and Ethernet-based and service-oriented communication provide the optimum basis for future vehicle architectures. 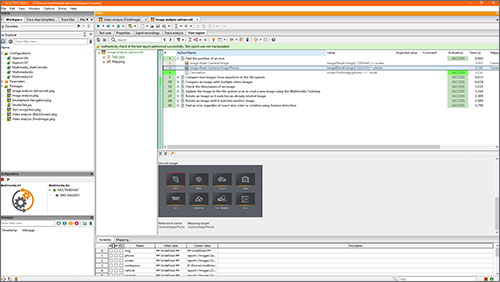 Multimedia and infotainment testing with ECU-TEST

Are you looking for a test automation tool to analyze the user interface of an infotainment system or to check the connectivity between smartphone and car? ECU-TEST has powerful adapters for automated testing of multimedia content.

Using the multimedia adapter, images or video sequences from image files, web URLs, streams, screenshots or directly from the cameras can be used for analysis. In this demo, for example, the analysis templates and API methods released by TraceTronic are applied

The operation of a smartphone can be easily automated using the Appium tool adapter. The adapter enables, for example, 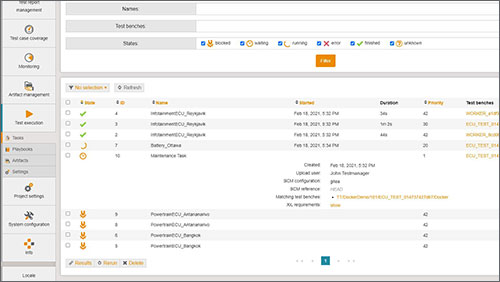 You want to distribute countless tests to your available test benches optimally or scale the throughput in virtual test environments dynamically? TEST-GUIDE orchestrates the parallel execution of your tests distributed across different systems, ensures the best possible utilization and monitors the current status of the test resources.

In this product demo, we use the Docker container technology as an example to show how easy it is to implement the execution of test cases on multiple ECU-TEST instances with TEST-GUIDE. This demonstrates how scalable testing is possible in your corresponding environment. Docker is fundamentally very well suited to support fully virtualized testing. It makes it easier to set up test environments as well as create many instances. Are you planning to use Kubernetes? No problem either - we support you.

Our tool chain is ready to go for any computer system - for any number of physical machines, virtual machines or even in containers.
We show you how scalable testing is also possible in your model environment. 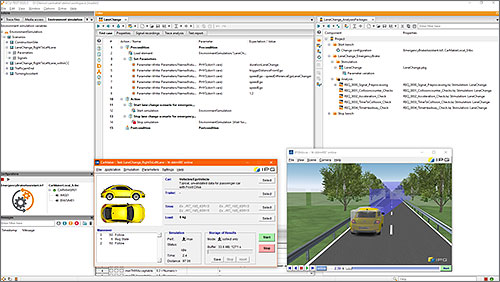 Are you facing the challenge of parameterizing the scenarios in your environment simulation and calculating meaningful key figures? ECU-TEST and TEST-GUIDE support you during test execution and follow-up.

In this product demo, we demonstrate scenario-based testing to you using our tool chain and CarMaker. The selection of scenarios is managed in the TEST-GUIDE database for higher-level collaboration. Via a direct connection to the test automation tool ECU-TEST, a concrete scenario with simple parameter variation can now be created and the test execution can be automated. Subsequently, the covered parameter spaces are evaluated and their criticality verified in order to evaluate the results of the ADAS software function. The test report in TEST-GUIDE contains a meaningful overview of all test executions and enables analysis and follow-up.

It is not important which simulation tool is used for scenario-based tests. Our tools support: IPG:CarMaker, Vires:VTD, Mechanical Simulation Corporation:CarSim, dSpace:ModelDesk, Synopsys:Silver and many other simulation tools.

Get a product demo