Initial ROS2 connection for recording and analysis of rosbag files

In the ADAS/AD field, digital twins are being used increasingly in the development of sensor-based driver assistance systems. These virtual images of physical systems can be set up as co-simulation platforms using ROS (Robot Operating System), or even as virtual environments for a test object (Device Under Test).

This can then be used to run various simulations based on different scenarios in order to test the (sensor) software which is to be tested right in the early stages of the development process. To test the software, the communication in the ROS network has to be analyzed. However, the manual evaluation of these ROS messages is very time-consuming.

For this reason, a ROS2 connection to ECU-TEST was created. This can be used to automate systems based on ROS2 Foxy Fitzroy.

Via this interface, it is possible for ECU-TEST to record and analyze so-called ROS topics (from rosbag files). In addition to this, the ROS system itself can also be tested in depth and in an automated manner in this way.

Easy exporting of the workspace when uploading playbooks

Formerly, the underlying workspace of a playbook had to be extracted from a version control system (Git, SVN). In order to be able to run playbooks, even without access to these systems, the export of playbooks from ECU-TEST has been extended.

It is now possible to export the current workspace as an artifact to TEST-GUIDE.

The export wizard allows referencing to workspaces that have already been stored in the artifact management, or direct uploading of the current workspace. 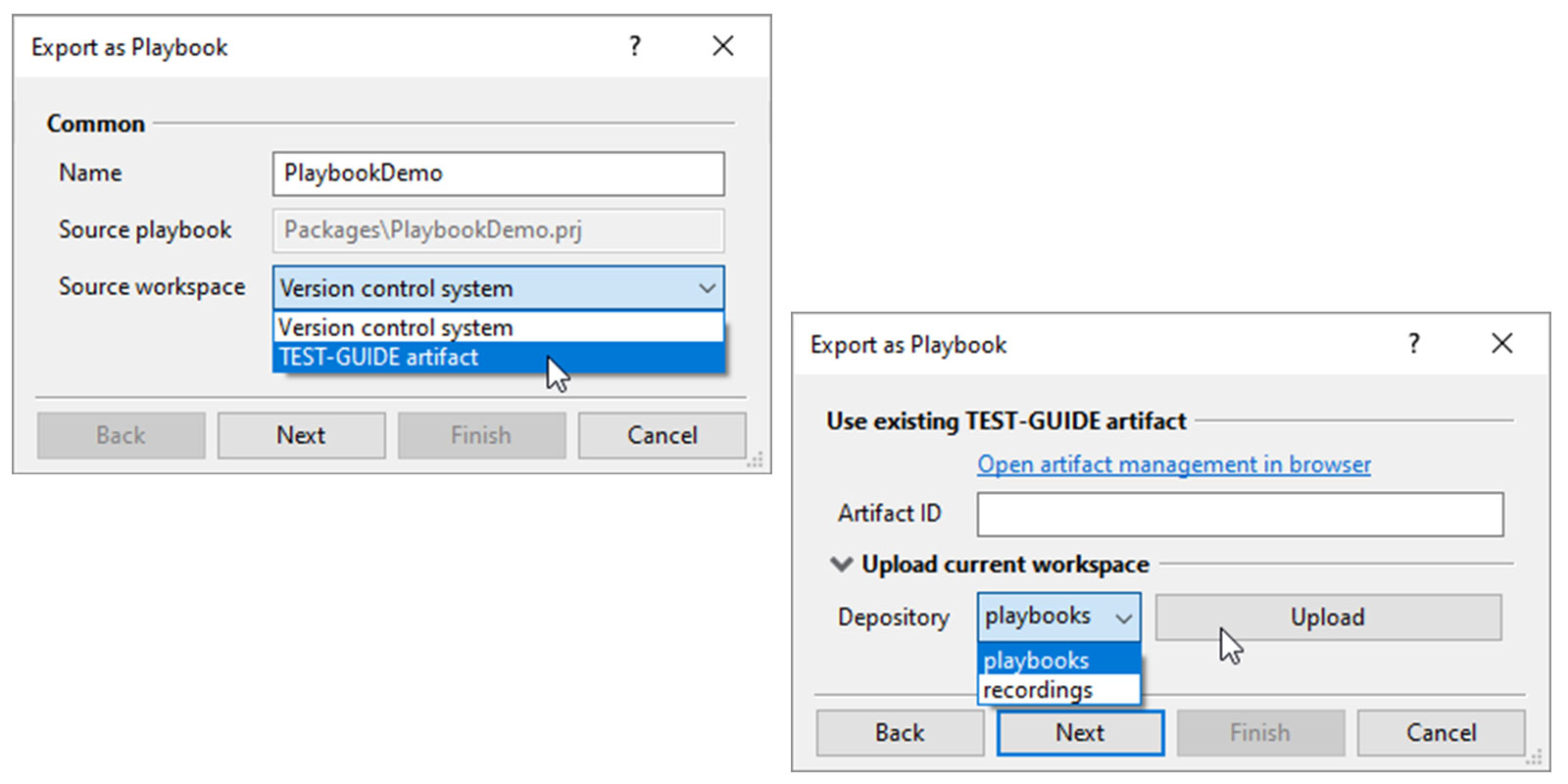 The tool connection to the ASAM standard iLinkRT 3.0 enables communication with measurement and calibration tools. This is an Ethernet standard that supports multi-client and multi-server connections.

Currently it supports the reading and recording of measured quantities.

By optimizing the read and write process and parallelization when reading multiple A2L files in the test configuration, memory consumption has been reduced, in addition to a significant acceleration of the processes.

In modern E/E architectures, security measures are being adopted to increasing extents to prevent known attack patterns on vehicle communication. One such measure is to use cryptographic protection on parts of the on-board network communication or on all of it. One possible application can be the implementation of the IPsec protocol in the on-board network.

Now ECU-TEST can also be used for securing or verification in cryptographically protected Ethernet networks. For this purpose, the built-in network solution allows for set up and communication in the networks with IPsec switching (for IPv4).

The current implementation supports the transport mode and the key exchange according to IKEv2. Active connections can thus be protected using the Authentication Header (AH).

Encryption (ESP) is not yet part of the scope of function. 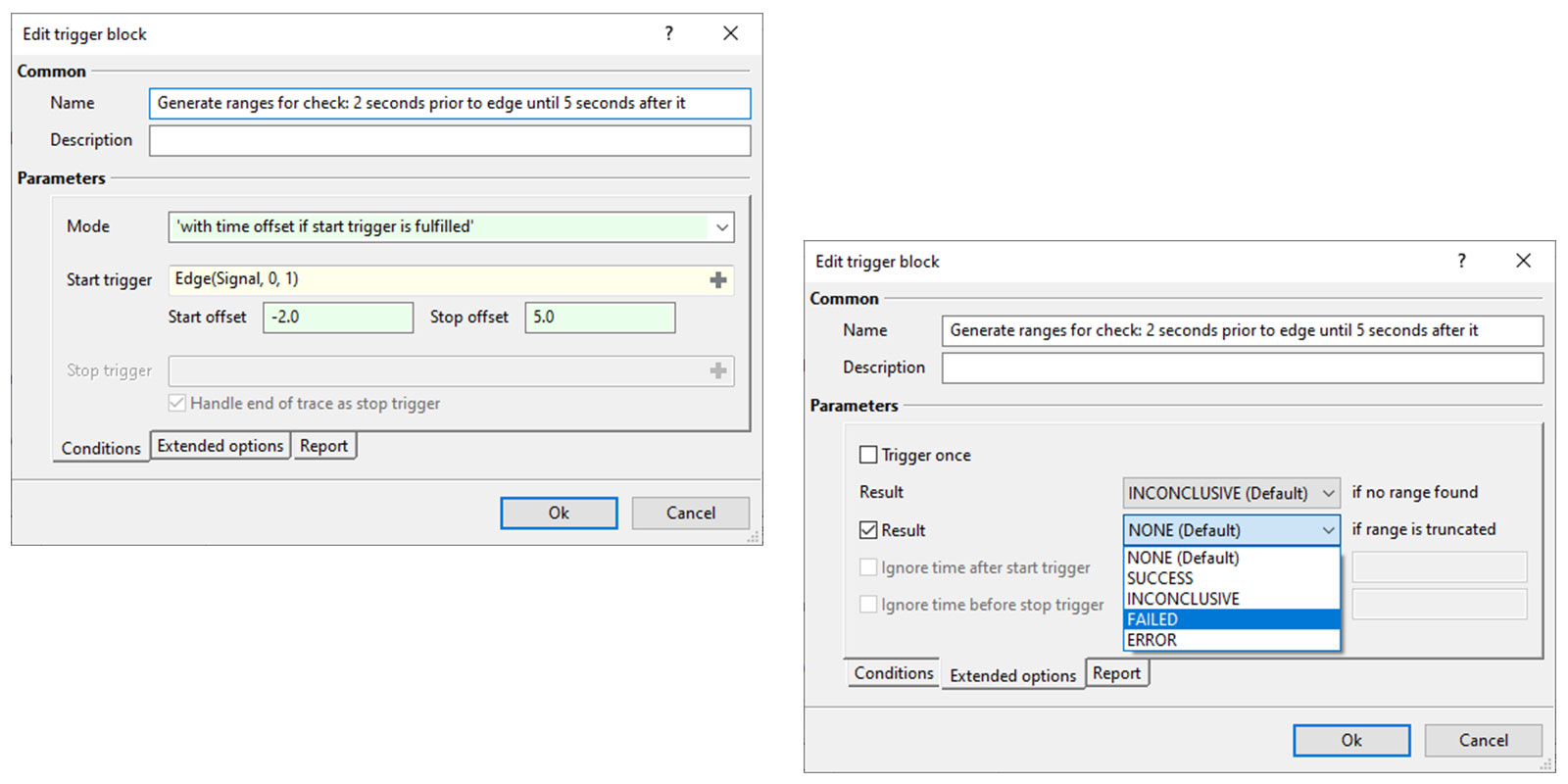 A new trigger mode was introduced in Release 2022.1:

This can be used to create time-defined trigger ranges that extend around a start trigger event.

The trigger range in this example is opened 2 seconds before a 0-1 edge and ends 5 seconds after that. Thus, with this new mode, it is possible for more trigger ranges of the same trigger block to overlap.

Truncated trigger ranges at the beginning and end of the trace or of the parent range can be explicitly evaluated (e.g. with FAILED). The corresponding setting can be found under 'Extended options' of the trigger block.

In the interactive signal viewer AutoSPY it is now much easier to identify the correct signals: 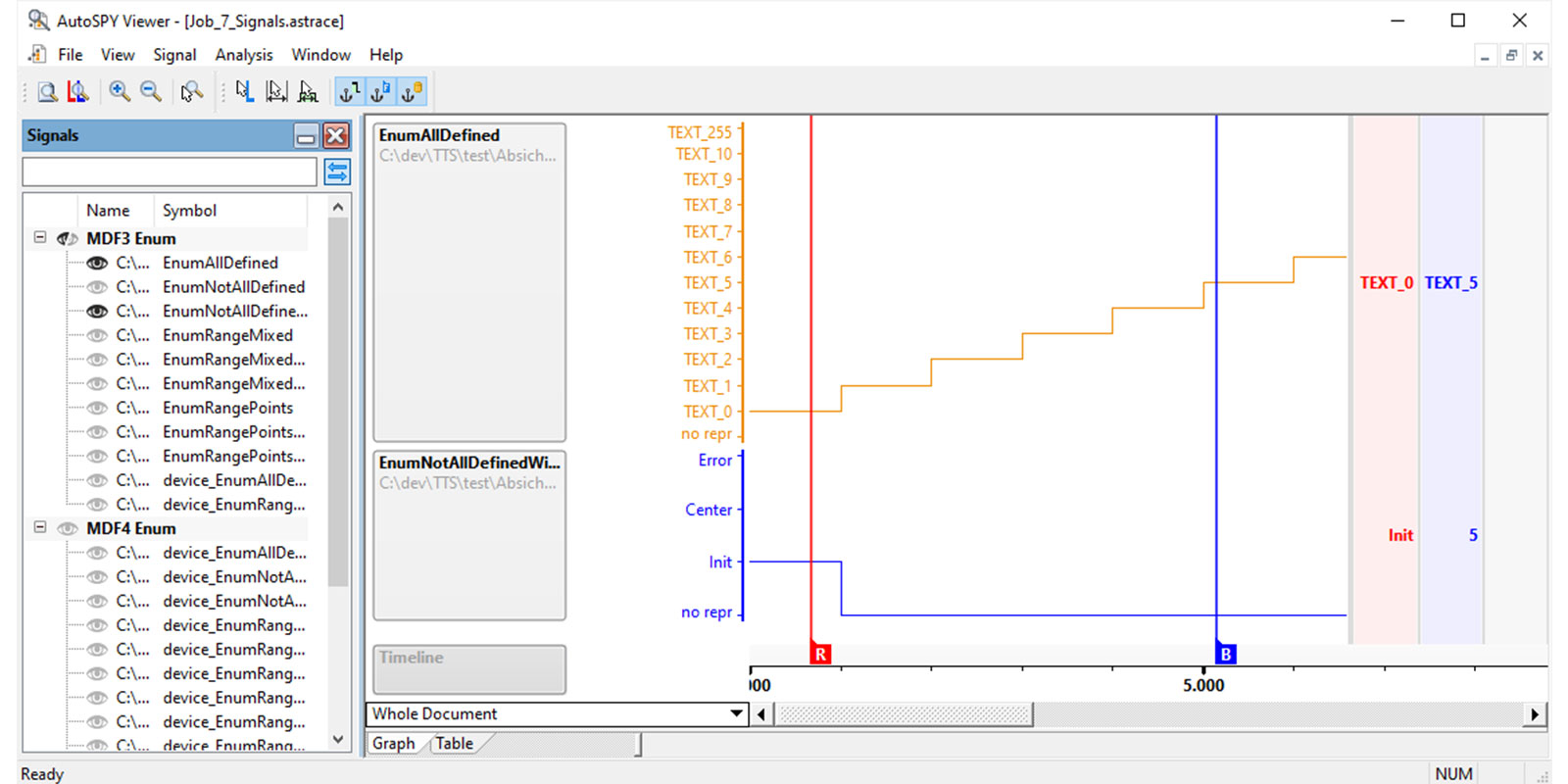 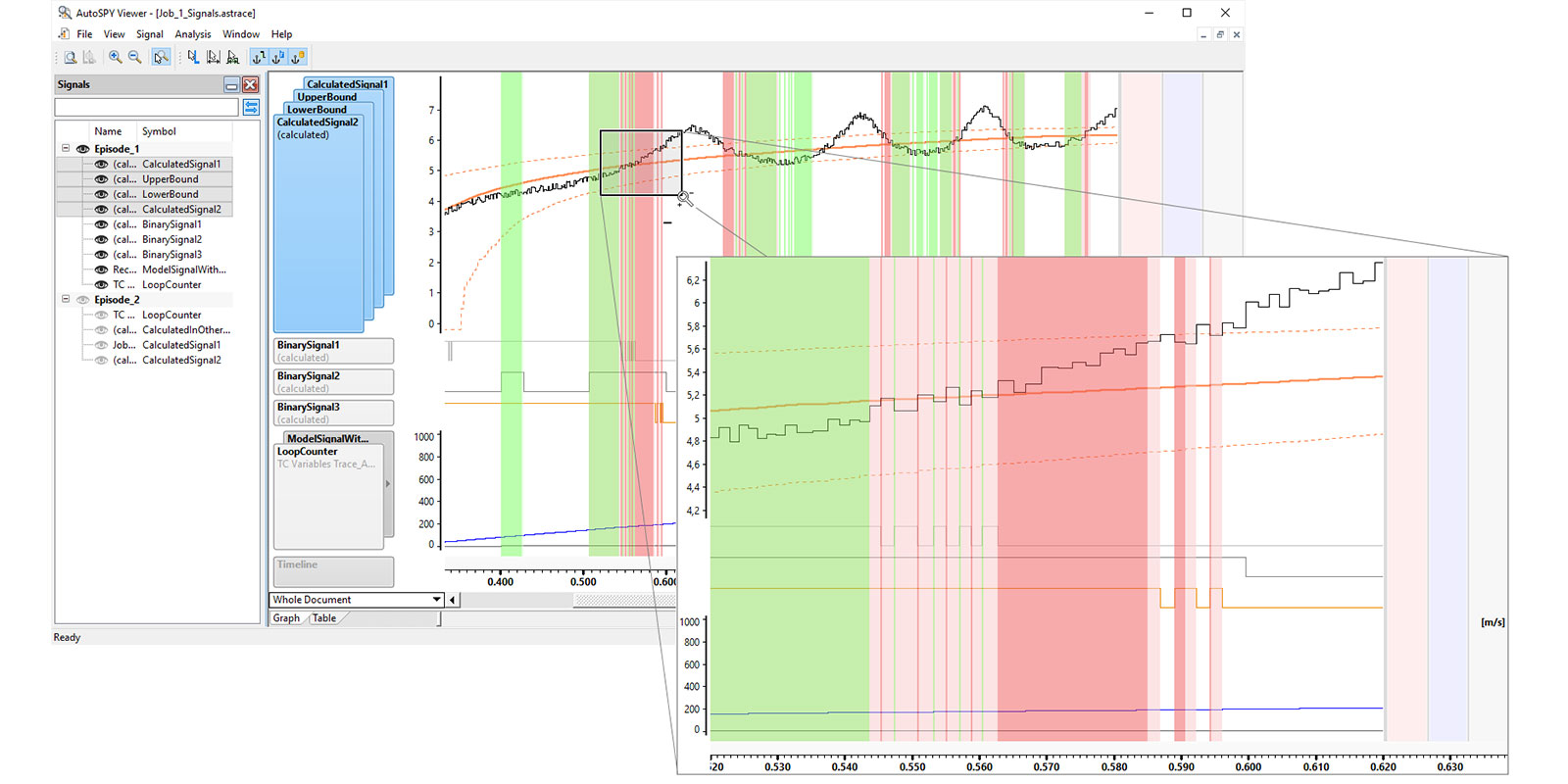 Also, the mouse zoom (Z) has been improved:

In the online case, ECU-TEST has been using an efficient and intelligent filter mechanism since release 2021.4 to handle very high data rates with high performance. In this process, parts of the service-based communication that are not relevant for the test case and the analysis will be recognized as part of a learning phase and filtered out at the operating system level in a resource-optimized manner. This results in reduced PCAP traces that contain only the data that is relevant to the test case and to the analysis.

Now ECU-TEST 2022.1 also supports the offline filtering of service based communication from PCAP traces. Here, the traces are created away from ECU-TEST, e.g. by loggers. This enables significant performance gains in the trace analysis of this data.

The length of the learning phase can be configured in the ECU-TEST settings in the 'Trace analysis' area. 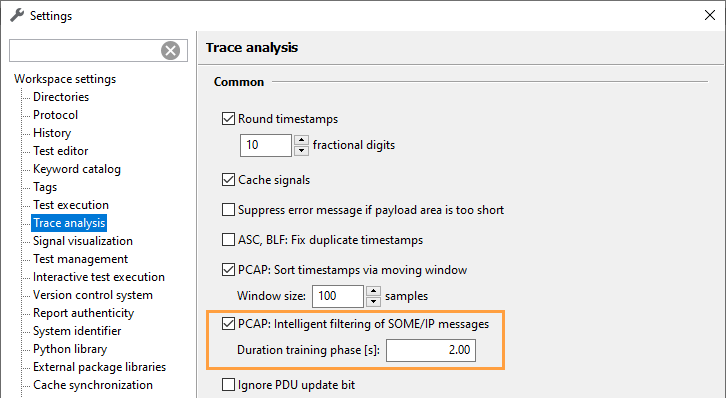 The new signal-based merging of traces generates synchronized and interpreted MDF4 traces based on arbitrary recordings of a package.

Specifically, all signals of the signal groups used are transferred to a common MDF4 file by means of the trace merge, with due consideration for the respective synchronization.

This is done with due consideration for the following:

The context menu can be used to update the link to the specification package and hence the version number as well.

Support for the IEEE 1722a protocol for bus communication via Ethernet 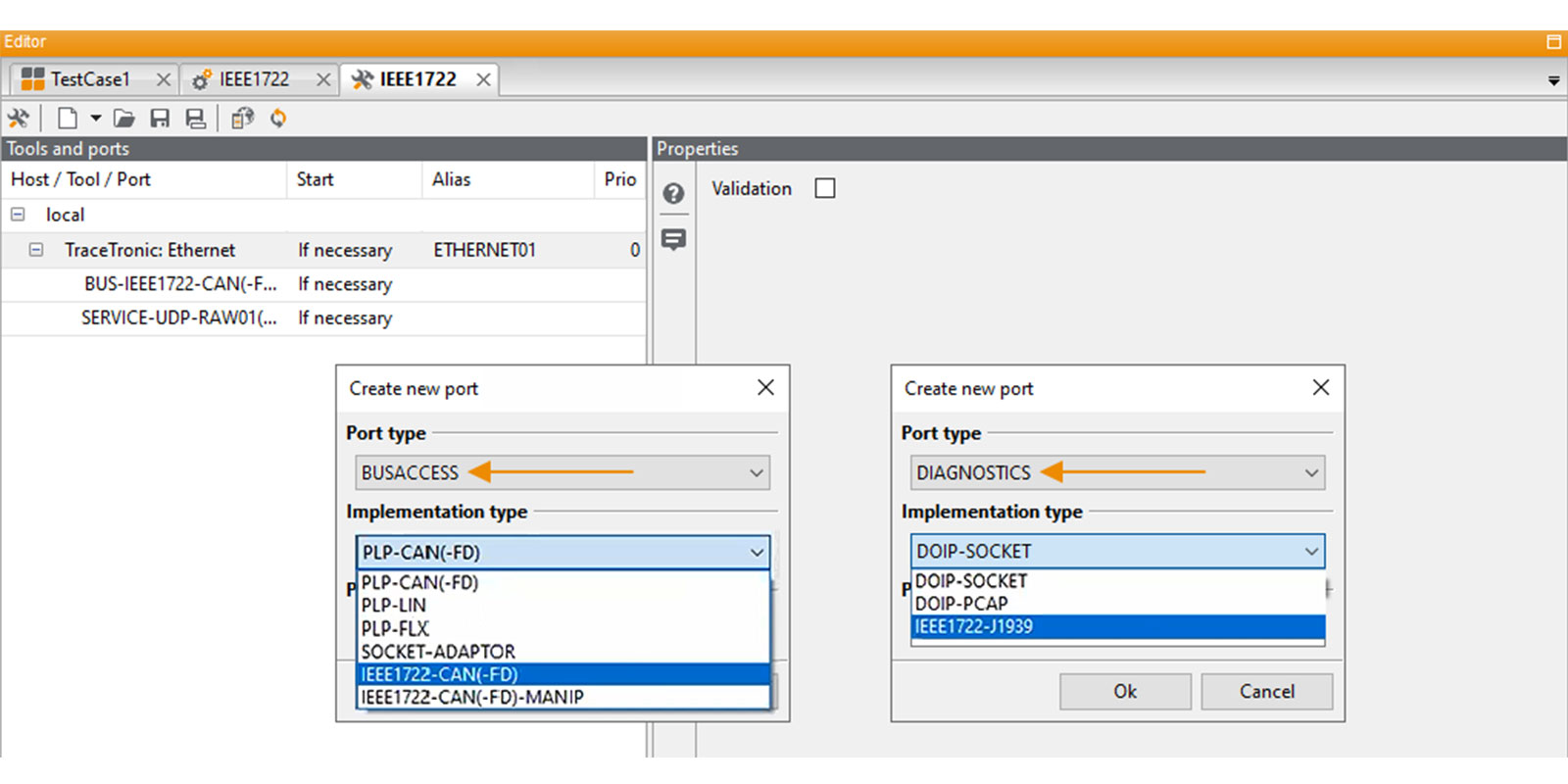 With the support, it is possible to use all known bus test steps by accessing the IEEE 1722 (CAN) Ethernet protocol as well.

For this purpose, new ports for bus access and J13939 are available on the Ethernet tool adapter.

Bus access: Support of time options and the selection of representation in the "Check initial value" test step

With the test step 'Check initial value', it is possible to access the first value of a signal since the start of the measurement (port start) or since the last call of 'Reset initial value'.

What is new is that now time options for the evaluation can also be configured in this test step. In addition, the representation of a signal value (physical value, text value, raw value, implementation value) can also be selected. The behavior is analogous to the test step 'Read'.

The precondition block has been extended to enable a more flexible handling of evaluation INCONCLUSIVE. Specifically, it is now possible to keep INCONCLUSIVE as the evaluation for a test case without canceling the test. 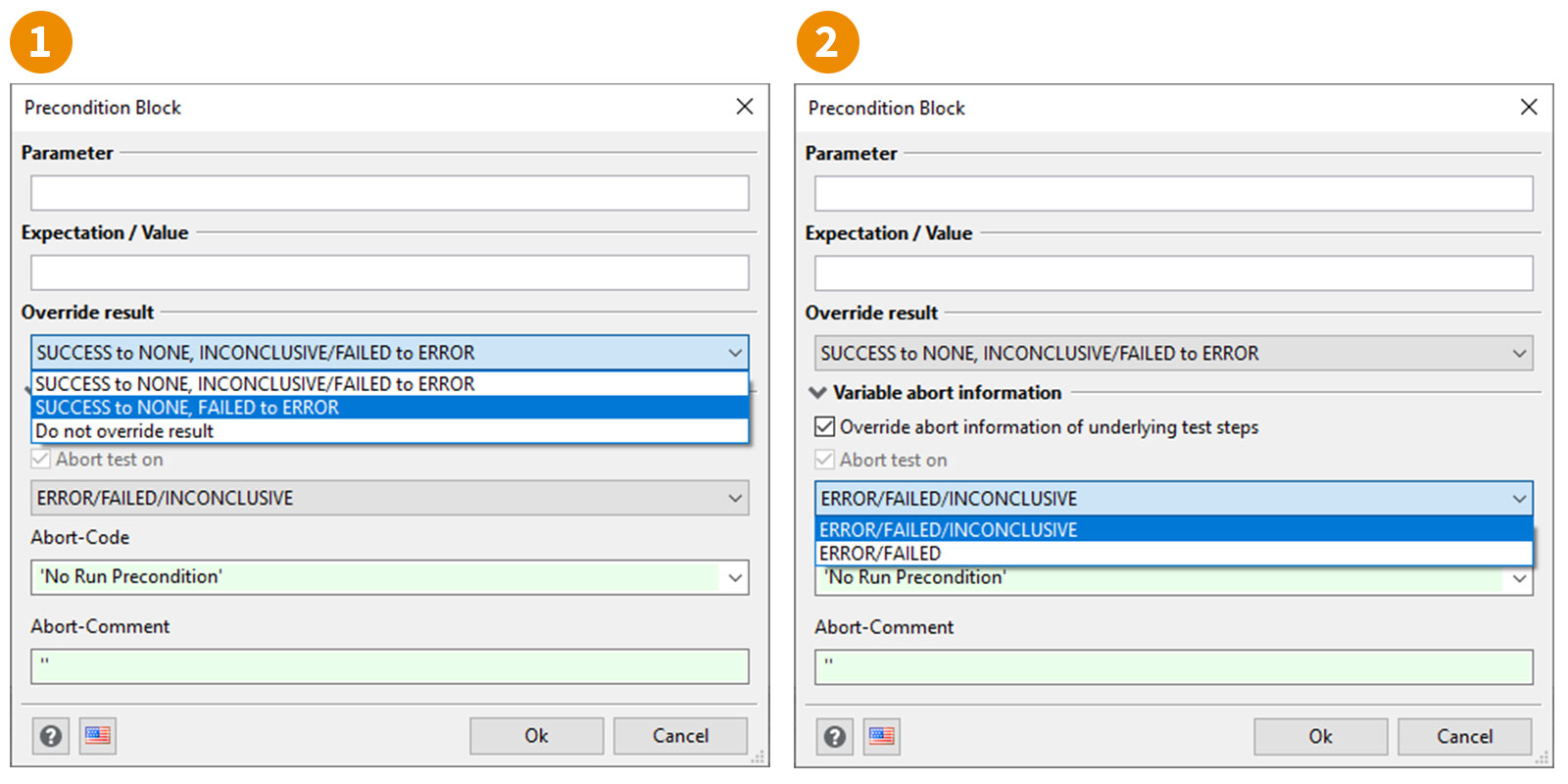 There are two new options for this:

1) Overwrite result: The selection list can be used to define whether the INCONCLUSIVE evaluation should be excluded when overwriting the evaluation or not.

2) Variable abort information: This option can be used to set whether the test case should be aborted or should continue to run in the event of an evaluation as INCONCLUSIVE.