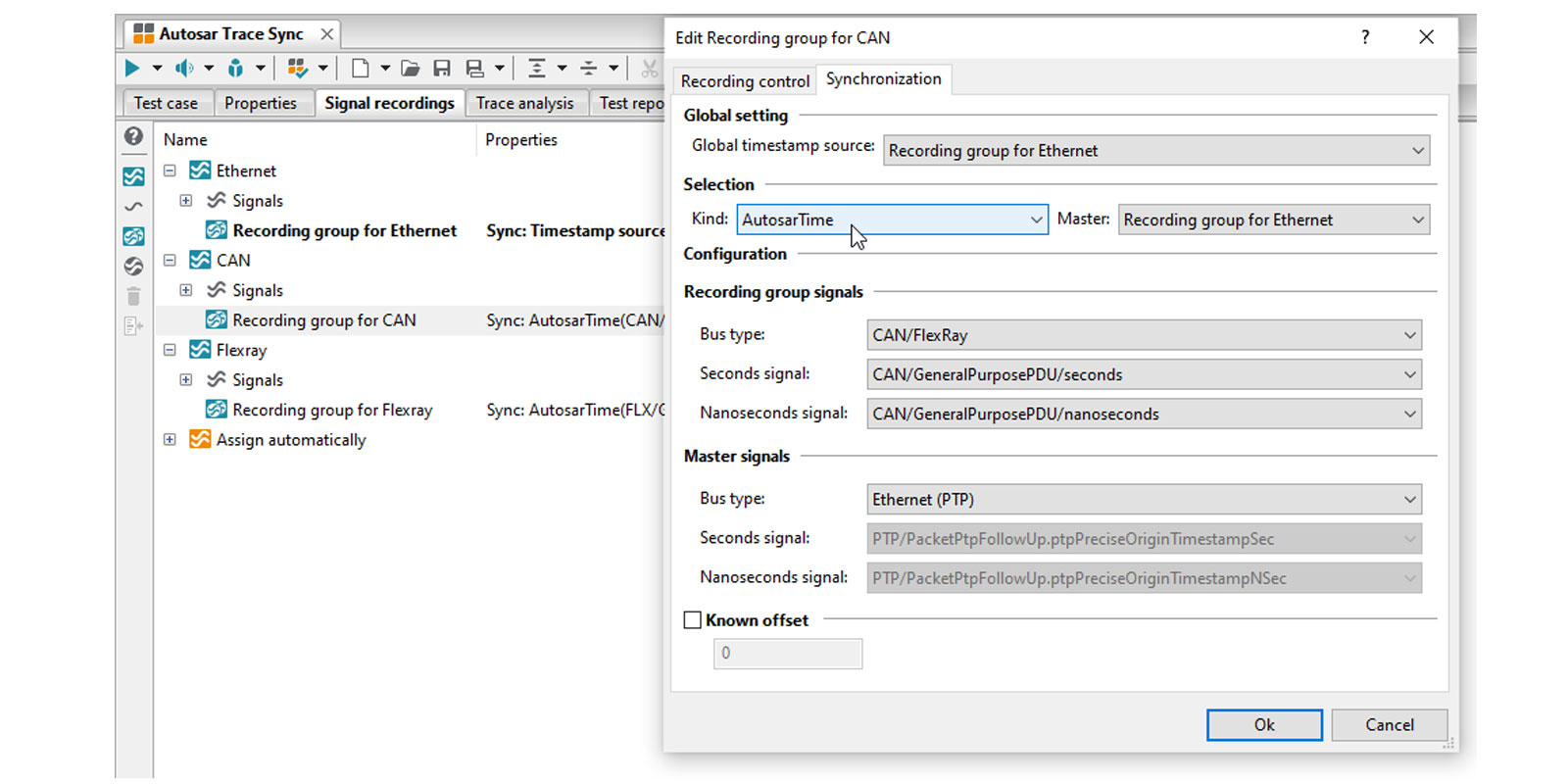 With AUTOSAR Time Synchronization, it is possible for ECUs to continuously synchronize their clocks in the network. The synchronization takes into account the message delays of complex networks and can achieve accuracies in the nanosecond range.

With the current version of ECU-TEST, the correct implementation of this protocol can be tested in the trace analysis. In addition, the globally synchronized time can be used for trace synchronization of Ethernet, CAN(FD) and FlexRay recordings, so that they can be meaningfully tested with relation to each other.

Compared to existing synchronization methods, a significantly better accuracy is achieved and additional knowledge about the test process or modifications to the test system are not required.

With ECU-TEST 2021.3 it is possible to use and evaluate audio channels recorded in the test case directly in the trace analysis. For example, the signal data can be processed efficiently with NumPy trace step templates.

The current version also supports all audio sources available on the system.

Note: These improvements are not yet fully implemented due to their early stage. If you are interested in trying out audio recording and analysis in ECU-TEST, please contact our support. 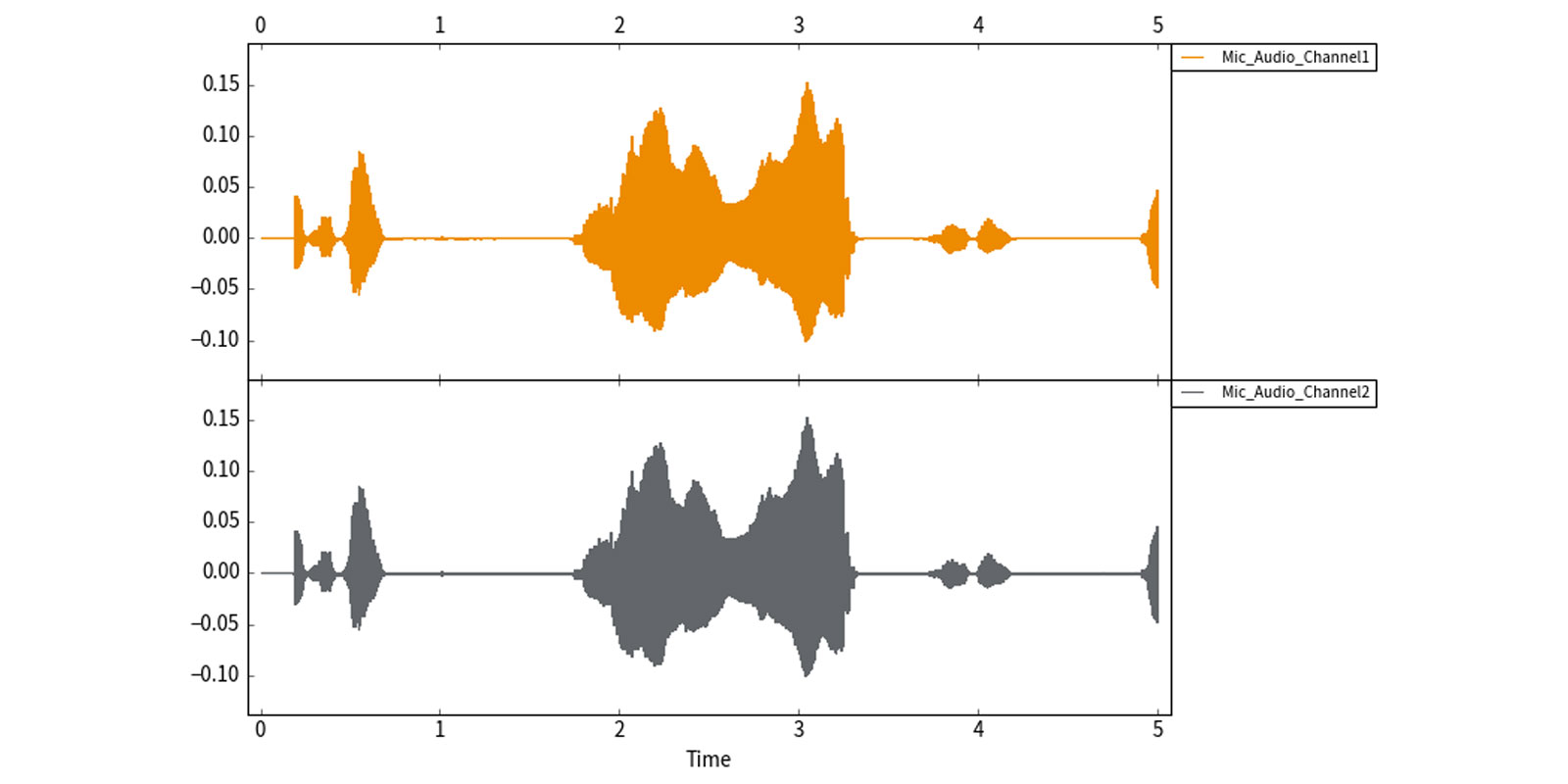 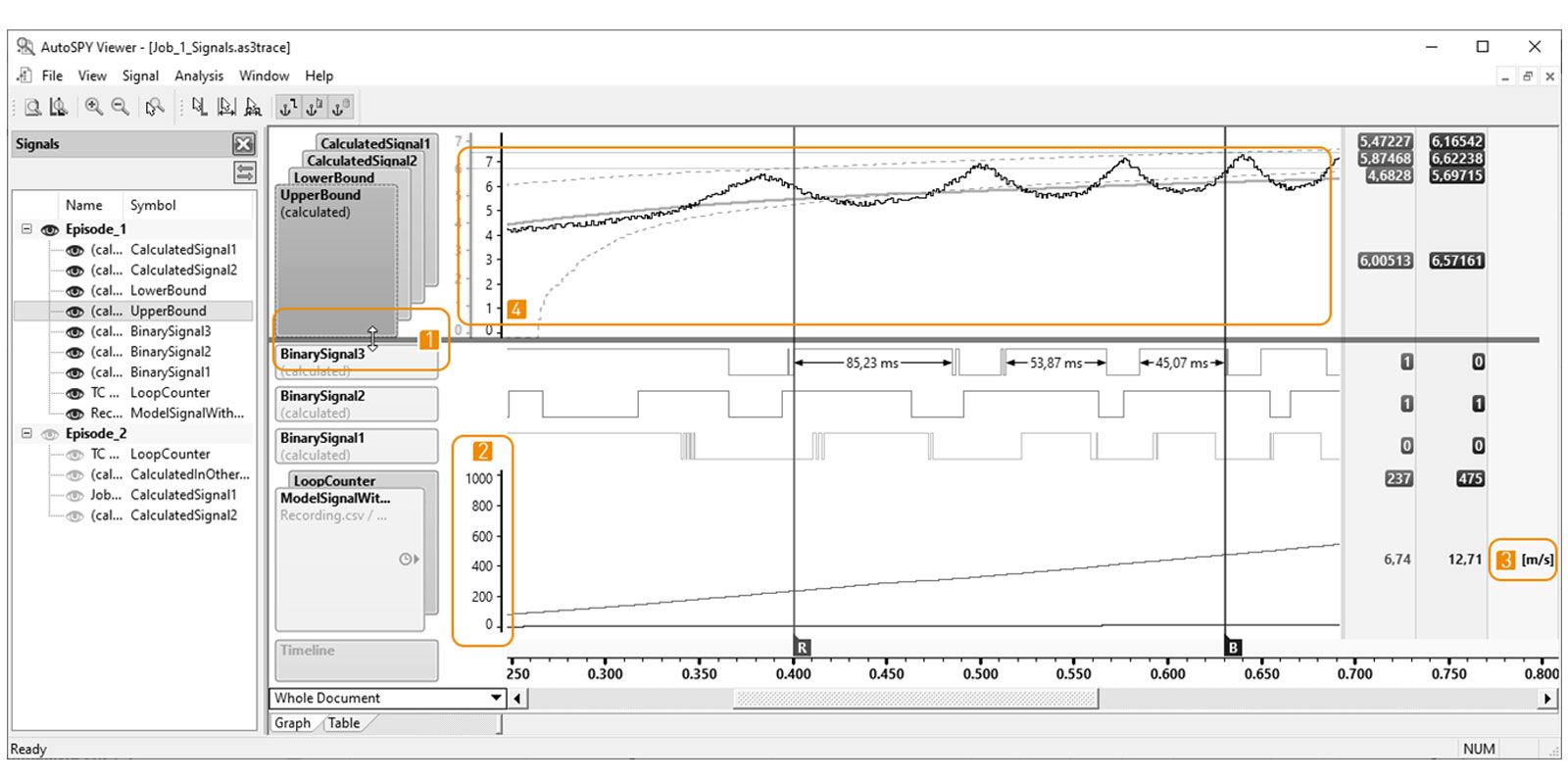 The diagram view of the interactive AutoSPY Viewer has been improved:

a) The size of the diagram can be changed intuitively by moving the lower range limit. This method of changing size applies to both individual signals and signal stacks.

b) Diagrams of analog signals include an axis with division and labeling. The enlarged context makes navigation easy in large diagrams. For signal stacks, the associated axis is highlighted when the signal is selected. In the context menu of the axis, the value range can be reset to actual values in the visible time range or in the entire document.

c) In addition to the measured values for the blue and red cursor, the physical unit for the signal values is displayed in a separate column. This makes it easier to identify signals and arrive at correct conclusions.

d) Finally, the possibilities for zooming and navigating in the diagrams have been extended:

Central depository/deployment of bus, service and A2L caches by TEST-GUIDE

Importing the bus, service and A2L databases for the first time can be time-consuming due to the size of the files and the complexity of the formats.

Through the central depository/deployment of the read-in caches, this process is required much less frequently. Reuses in ECU-TEST therefore access a cache of these files.

After importing into the database, the associated cache is stored in encrypted form in a configured TEST-GUIDE depository. Other ECU-TEST instances can access the cache from there instead of creating separate caches. 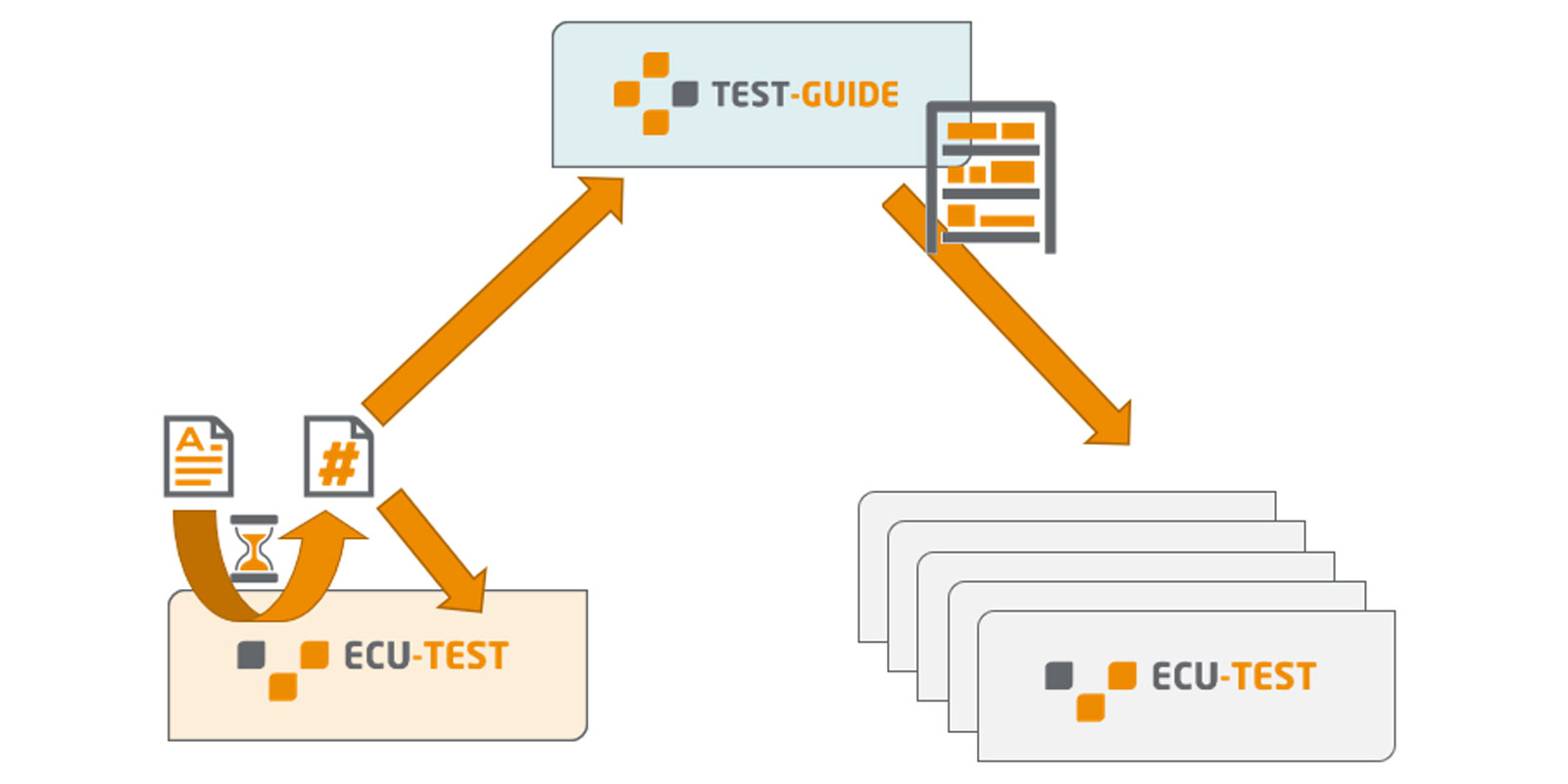 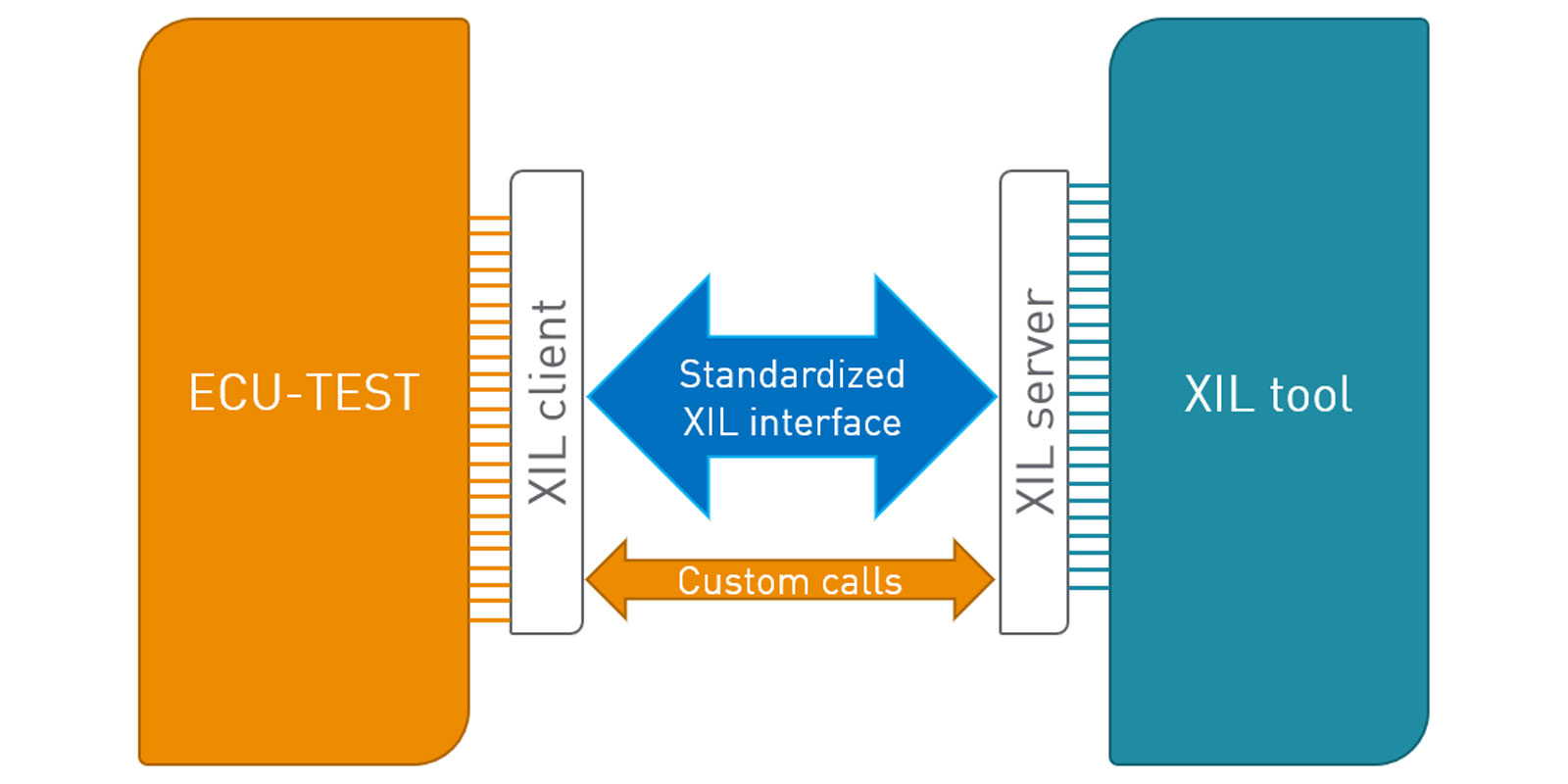 Thanks to a standardized interface, ASAM XIL enables applications to conveniently connect to ECU-TEST. The standard defines a wide range of functions that cover a variety of use cases.

Our interface extension makes it possible to publish methods on the server (test bench and ports) and make them available in ECU-TEST as tool and port jobs.

AUTOSAR: Support of Classic and Adaptive AUTOSAR releases R19-11 and R20-11 for bus and service communication

The AUTOSAR (AUTomotive Open System ARchitecture) methodology has established itself in many areas for describing modern E/E architectures, especially for on-board network communication.

With the CAN mini rest bus simulation, it was possible in earlier versions of ECU-TEST itself to describe simple simulation (max. 20 messages, min. 10ms cycle times) in test cases.

Access to diagnostic systems is an important component of many test cases in the automotive segment. With the ECU-TEST diagnostic add-on, there is an option to use UDS diagnostic functions in test cases.

In addition to support for diagnostics via CAN (ISO-TP) and Ethernet (DoIP), diagnostics is now also possible via FlexRay.

The trends of autonomous driving and networking in automotive software development are leading to a significant increase of onboard network communication and huge increase in data rates, the complete processing of which poses a challenge for many tool manufacturers. The result is often data loss.

With the passive Ethernet service port, SOME/IP test parameters up to 100MBit/s* bandwidth can now be fully analyzed as part of the test case. In addition, there was a significant increase in performance during PCAP recording (tested up to 1.3 GBit/s). The analysis time of these traces could be significantly reduced.